Primarily, it works to fight oxidative damage that occurs in the fatty tissue, DNA, and proteins in the body that may lead to the development of diseases and acceleration of aging. Glutathione also maintains the body’s immune system by flushing down toxins and heavy metals.

In fact, glutathione is used in the treatment of cancer, heart disease, osteoarthritis, anemia, chronic fatigue syndrome, and other diseases. It is also recognized for its skin-improving ability. When injected, it becomes more efficient as it bypasses the digestive system. Please take a doctor’s prescription before taking any dosage or form (injectable or nasal) of glutathione.

Glutathione 600 mg has to be reconstituted with bacteriostatic water (BAC).

Glutathione or GSH is an antioxidant compound commonly available in plants, animals, and certain forms of bacteria and fungi. The substance is a tripeptide, derived from three amino acids, with a gamma peptide linkage between the carboxyl group of the glutamate side-chain and cysteine.

Glutathione is the most common and widely found thiol in plant and animal cells, with a range from 0.5 to 10mM, and it can be found in both the cytosol and the organelles. While all types of animal cells can synthesize glutathione, only glutathione synthesis that occurs in the liver is essential.

In the preliminary stage, gamma-glutamylcysteine is synthesized from L-glutamate and cysteine, a conversion that requires the glutamate-cysteine ligase (GCL)  enzyme and acts as the rate-limiting step in glutathione synthesis. In the second stage, the glycine is attached to the C-terminal of the gamma-glutamylcysteine, a condensation that is catalyzed by glutathione synthetase.

Glutathione works primarily as an antioxidant, as GSH helps protect cells from oxygen damage by neutralizing reactive oxygen species, a type of chemical molecules that are highly reactive and formed due to the electron acceptability of O2. Glutathione is also a participant in the production of thiol and redox regulation of cellular thiol proteins under oxidative stress by protein S-glutathionylation. This reaction leads to the formation of a type of unsymmetrical disulfide from the protectable protein (RSH) and GSH. On top of this, Glutathione is also put to work for the detoxification process of methylglyoxal and formaldehyde, which are toxic metabolites that are produced under oxidative stress. This detoxification process is carried out by the glyoxalase system, which catalyzes the conversion of methylglyoxal as well as that of reduced glutathione to S-D-lactoyl-glutathione. Glutathione also maintains exogenous antioxidants such as vitamin C and Vitamin E in their reactive or active states.

Glutathione is required for numerous metabolic processes as well as for the biosynthesis of leukotrienes and prostaglandins. It also plays a role in the storage of cysteine, and even enhances the way citrulline functions as a part of the nitric oxide cycle.

Glutathione also facilitates the metabolism of xenobiotics. The Glutathione S-transferase enzymes catalyze its conjugation to lipophilic xenobiotics, furthering their metabolism. Along with oxidized glutathione, it also binds to the glutamate recognition site of the NMDA and AMPA receptors and may be considered a neuromodulator.

Glutathione binds and activates the isotropic receptors of the body, thus making it a potential neurotransmitter.

Role of Glutathione In The Human Body

Numerous lab research studies and elaborate tests have gone to show that glutathione injectable plays a unique role in the human body, specifically in the prevention of diseases. The cause and effect relationship between Glutathione and illnesses such as diabetes, cancer, cystic fibrosis, and more have been shown time and again.

Research has shown that once a tumor has developed to a certain size, by conferring resistance to a variety of chemotherapeutic drugs, elevated levels of glutathione in cancerous cells can protect bone marrow cells, cells in the breast and colon, and more. It is also crucial in the removal and detoxification process of carcinogens.

In the case of Alzheimer's, extracellular amyloid-beta plaques, neurofibrillary tangles, and inflammation in astrocytes and microglia all seem to consistent features of Alzheimer's Disease. In recent years, soluble oligomeric amyloid-beta plaques have begun to be considered as a major factor of importance. However, the upregulation of Glutathione can lead to a reduction of the oxidative and neurotoxic effects of amyloid-beta.

Glutathione dosage can also prevent the acceleration of the aging process and gives the body a critical defense system against various forms of stress through Glutathione upregulation.

Glutathione may even play a role in the treatment of cystic fibrosis when inhaled and can be used to treat certain forms of heart disease, osteoarthritis, anemia, and chronic fatigue as well.

A: Extensive lab research shows that certain doses of glutathione can help in the treatment of and protection from cancer, osteoarthritis, anemia, chronic fatigue and help fight oxidative damage.

2. How Much Does It Cost For Glutathione Injection?

A: Glutathione infections can cost you anywhere between $25-$50 a vial, without accounting for the BAC water required to reconstitute it.

3. What Are The Benefits Of Glutathione Injection?

A: Glutathione injections can enhance cell protection from cancer, and fight oxidative damages caused in fatty tissue, DNA, and proteins. It also reduces the acceleration of aging, and can also reduce the intensity of Alzheimer's Disease and cystic fibrosis.

4. Can Glutathione Be Injected Subcutaneously?

A: Yes, glutathione can be injected/injectable either intravenously or subcutaneously, and may be taken nasal form as well.

There are no reviews yet. 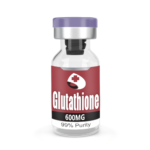