Epitalon is a research peptide developed by the St. Petersburg Institute of Bioregulation and Gerontology. It is presumed to be the active component of epithalamin which has shown potential benefits on longevity, endurance, and metabolism.

Epitalon 10 mg should be reconstituted with bacteriostatic water (BAC).

Epitalon is a form of synthetic tetrapeptide that is simple in nature and consists of the following amino acid chain: ala-glu-asp-gly. It works as a telomerase activator and functions as a putative anti-aging drug as well.

Epitalon was developed and synthesized by Dr. Vladimir Khavison, who works at St.Petersburg Institute of Bioregulation and Gerontology and was initially identified as the putative active component present in bovine pineal gland extracts, which are known as epithalamin. The drug is still under research for its various age-affecting properties, that can help reverse and reduce age-related issues, include its probably ability to increase lifespan, increase endogenous levels of antioxidants, improve retinal health and vision, enhance regulation of key bodily substances such as insulin, cortisol and melatonin as well as its potential ability to reduce tumors.

As Shown By Animal Trials

Lab research studies conducted at the St. Petersburg Institute of Bioregulation and Gerontology, as well as other institutions all over the world, indicate that Epitalon can induce the elongation of telomeres through increased telomerase activity in the somatic cells of humans, in vitro. These conclusions were drawn after a study of human fibroblast cell cultures. The elongation of telomeres by Epitalon was sufficient enough to cross the Hayflick limit in the cell culture of human fibroblast cells, and extended even their potential for proliferation from termination at the 34th passage in the population of control cells to beyond the 44th passage in the population of treated cells, all the while increasing the length of telomeres to levels that can be comparable to those in original cell culture. in the control cell population

Furthermore, studies also show that epitalon induces heterochromatin decondensation near the centrometers of cultured lymphocytes that arise from samples that have been taken from human beings, aged 76-80 years. It can even inhibit the synthesis of the MMM9 protein, which leads to degradation of extracellular matrix, in vitro aging skin fibres.

An in-vivo study conducted on aging mice showed that the providing epitalon treatment reduced the incidence of chromosomal aberrations, for both wild-mice as well as for mice who are characterized by accelerating aging phenotypes, that are also consistent with increases in telomere length. Another study conducted on aging rats also showed that epitalon increased the functioning and activities of antioxidant enzymes, which are superoxide dismutase, glutathione peroxidase as well as glutathione S-transferase. Epitalon even reduced the number of spontaneous tumors and metastasis in mice that did develop spontaneous tumors, when an experiment was conducted on a one-year-old female. A different study conducted on aging rats also showed that epitalon led to an extension of their life span, who were constantly exposed to illumination, which was supposed to depict the natural light regimen that is indicative of northern regions of the world.

A study was also conducted on chickens, who were subjected to neonatal hypophysectomy as well as subsequent maturation, the recovery of morphological structures of the thymus was induced and promoted by epitalon. The structure and function of the thyroid gland was also promoted. It even increases the proliferation of lymphocytes present in the thymus, by putatively increasing the production of interferon gamma by T-cells.

As Shown By Clinical Human Trials

Studies were also conducted on humans, which showed that both epitalon as well as epithalamin increased the length of the telomeres significantly, to a great extent amongst subjects aged 60-65 as well as 75-8, and they were both efficient. It also restored the secretion of melatonin in both humans and monkeys.

A trial conducted on a sample of humans suffering from retinitis pigmentosa saw that the epitalon led to a positive clinical effect, in almost 90% of those in the treated group.

A cohort human study conducted on 266 people of over 60 years of age, showed that when treated with epithalamin, there was a 1.6-1.8 reduction in mortality in the coming 6 years. Similarly, another cohort study conducted on 79 patients, showed that they has increased physical endurance, better circadian rhythm and carbohydrate as well as lipid metabolism. 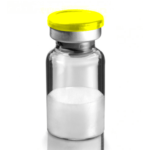