CJC-1295 without DAC 2 mg should be reconstituted with bacteriostatic water (BAC).

Often referred to as a growth hormone secretagogue, which can induce the production of growth hormones in the body, CJC-1295 was developed by ConjuChem Biotechnologies, a biotechnology company located in Quebec, Canada. Lab research studies have shown that CJC-1295 is a modified form of GHRH(1-29) with improved pharmacokinetics, especially in the arena of half-life improvement.

CJC-1295 is a pentapeptide, consisting of 5 short peptide chains, which behave like ghrelin mimetic, mimicking the behavior of ghrelin, binding to the ghrelin receptors of the body, and selectively stimulating the release of the growth hormone from the pituitary gland.

CJC-1295 is said to increase the level of plasma growth hormone as well as Insulin-like Growth Factor in both animals as well as humans. Research studies show that with a single injection, CJC-1295 can increase plasma GH levels in human subjects by 2 to 10 times more than the current level within 6 days to a week, whereas plasma IGF levels can increase from 0.5-3 times within a period of 9 to 11 days.

Through processes of conjugation, where a stable covalent link is formed between two molecules, CJC-1295 is shown to extend the half-life and the bioavailability of GHRH (growth hormone-releasing hormone) 1-29 and stimulate the secretion and production of insulin-like growth factor.

The injection and ingestion of CJC-1295 do stimulate weight gain in animals. However, it does not affect levels of prolactin (the hormone responsible for stimulating the production of breast milk), follicle-stimulating hormone (a glycoprotein polypeptide hormone responsible for regulation and development of pubertal maturation and sexual functioning), luteinizing hormone (a hormone produced by gonadotropin cells which stimulates ovulation in females as well as the development of the corpus lutem) and the thyroid-stimulating hormone (a pituitary hormone that stimulates the production of thyroxine and triiodothyronine)

CJC-1295 also does not affect or stimulate the secretion of adrenocorticotropic hormone (ACTH) or cortisol, and is highly selective, meaning that it triggers only the specific secretion of GH (Growth Hormone). you can also take it in nasal form.

CJC-1295 was under investigation and research as a potential treatment for lipodystrophy, an acquired physical disorder where the body is unable to maintain and produce healthy fat tissue, as well as growth hormone deficiency. However, clinical trials were halted beyond phase II.

CJC-1295 is widely used in bodybuilding circles and athletes for increased gains, although the usage of such substances isn't permitted in competitive platforms and is considered a form of doping.

CJC-1295 is available in reconstituted injectable form as well as in the form of oral troche.

CJC-1295 peptides are generally to be administered in the evening, as that is the typical time when the body secretes the growth hormone, making it the ap test time of the day for injection.

All dosages are to be taken on an empty stomach, preferably an hour before eating a meal or 1.5-2 hours after eating.

A cycle can be continued for 15-16 weeks at a stretch, however possible repercussions and side-effects of extended cycles must be consulted beforehand.

CJC-1295 shouldn't be consumed in combination with corticosteroids or thyroid medications, and shouldn't be used by pregnant or breastfeeding women.

A: CJC 1295 Ipamorelin has shown to have a low rate of interactive methods, although a certain section of users has shown to experience dizziness, headaches, and hot flashes.

A: CJC 1295 are prevented for usage by athletes and bodybuilders for a competitive purpose, and also barred from usage by the FDA.

3. What Is The Best Peptide For Weight Loss?

4. Will Peptides Make Me Bigger?

A: Peptides may lead to enhanced muscle development and increased muscle growth, along with enhanced strength and improved metabolism.

A: The best time of day to take CJC 1295 Ipamorelin is in the evening, as that is the time when the body naturally secretes the growth hormone. 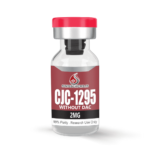